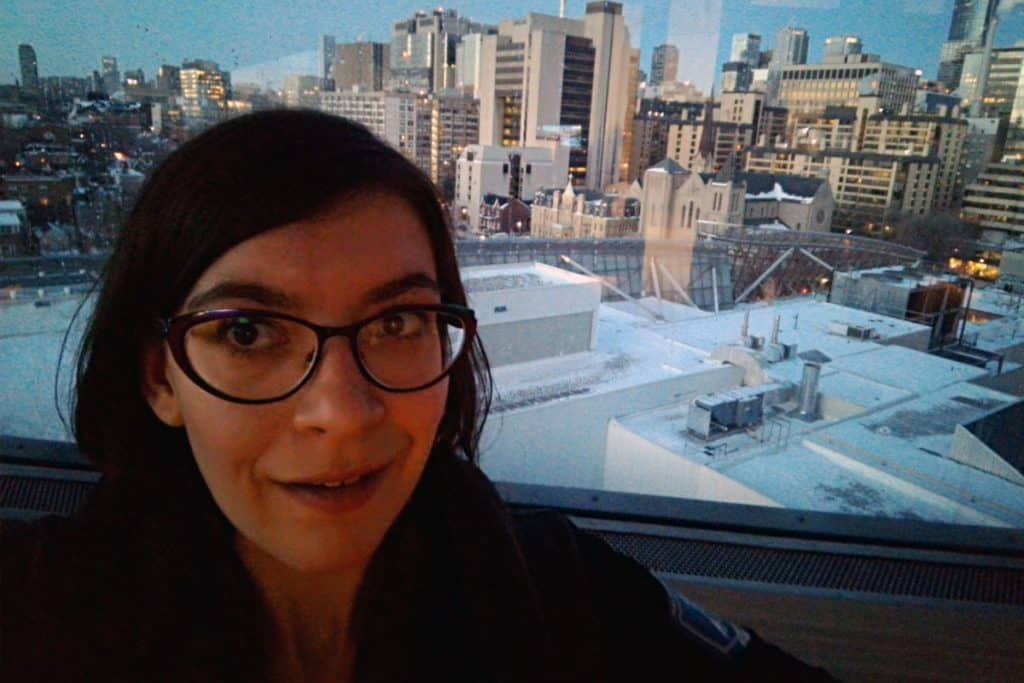 Hi Melissa, thanks for agreeing to be interviewed. Can you tell us about yourself?

Thanks for having me! I’m a gameplay designer at BioWare focusing on creature design, and previously spent 9 years working as a freelance artist, designer, and producer.

I confess that I am the sort of person who decided to make video games when they were 13 and never looked back, stubbornly digging in their heels and fighting everyone who said that I shouldn’t or couldn’t do it. A cliche, I know. Back then, I shared a Compaq Presario with 32mb of ram, a Pentium II processor and 4 gigs of hard drive space with all five of my siblings and my parents and I would create hidden folders all over the place where I hid pixel art drawings and experimental game mods and game projects. My siblings could usually not figure out where I was hiding it all, although once in a blue moon stuff would get discovered and deleted so that room could be made for something else. I’d make random stuff and share it with my friends at school. Finally, when I was 15 a friend of the family who saw some potential in me helped me buy the parts I wanted so that I could build my first computer. There was really no looking back after that. I skipped a ton of school and really became addicted to the act of creation itself. I have a lot of really positive memories from back then – up way past midnight listening to my older sister’s cassette tapes while she was sleeping (sorry MIchelle lol), working through some weird bugs in a mod or RPG Maker game or whatever.

After I finished my postgraduate education at Humber College in Toronto I travelled all over North America working for a ton of studios, most of them indie, and really just doing whatever jobs they needed. Most of my skills outside of art is very much self-taught. Even in grad school, I was the only person in my animation program producing any game content. Although Unreal Engine was available to us, I had to learn to use it on my own to create the stuff that I wanted to at that time. I graduated during the recession (in 2008) but still managed to ship a handful of small games in my first couple of years post-grad, generally as a 2D/3D artist, eventually landing a job on Disney’s Club Penguin in a mixed art and design role. After that I worked on dozens of other indie games, often in a leadership position. I had the opportunity to build my own small team on a couple of occasions, I was an art director for awhile… At one studio I was an artist, designer and producer all at the same time (I still have old business cards from back then lol, it must have looked ridiculous to people). After that job I decided that I was sick of working 80 hour weeks, and really wanted to become world class at one part of games development. I chose design and started actively looking for a home where I could grow in the way that I wanted. BioWare ended up being that home.

How did you get into game development?

I do feel like the above question answers this. To give a bit more context, I think when I was 12-13 I both really realized how much I love computers, but also how important video games were going to be for art and the world. I remember when I was 13, pretty much the first thing I did on it was go directly to yahoo.com and search, “video game engine.” I don’t even know how I learned what a video game engine was, just that I wanted to see what they were like. My first engine was actually RPG Maker 2000, and I eventually moved on to Unreal 3. Nowadays I literally use whatever is the best engine for the product. I have some degree of design experience in pretty much all publicly available engines. I use Frostbite at BioWare which is an engine used by EA and similar to Unreal 4.

You’ve been with Bioware for a few years as a Gameplay Designer. What does a day look like in this position?

I’ll be honest – my days are complicated, and I have my hands in a lot of pies.

So – usually I try to front load my day with meetings and then focus on just design work in the afternoon. I was going to write out what a typical day is like but in all honesty every day is different. I do a lot of in-engine design work but also work on design documents, my own pitches, other people’s pitches, and non-design-related studio and outreach initiatives. I also negotiate and speak to a lot of people in other departments as needed. So I get involved with a lot of other people – other designers, animators, producers, engineers, QA, etc. We all have to work in consort and are very much involved in the whole process, while still respecting each other’s boundaries and expertise. I also produce a lot of things that are essentially prototypes and have to make it through a thorough review process from that first step to the final product that the player experiences. So sometimes that just gets crazy for a bit. You’re going through a process where you aren’t always actually sure if something will work and you’re constantly making yourself vulnerable, so you have to be comfortable working in that headspace.

The first meeting of YEGFEMDEV was in June 2018 and has continued as a monthly event. It has been an awesome addition to Edmonton with great talks in a safe environment. Can you give us a rundown of what YEGFEMDEV is for those unfamiliar with it?

YEGFEMDEV is a monthly meetup for video game developers in Edmonton who are female, genderqueer, nonbinary, femme, two-spirited, trans or cis women as well as allies. We accept everyone as long as they treat others with dignity and respect. I believe that everyone’s game development journey is different, and that all games are valid. It’s on the second Tuesday night of most months (Jan-Nov, we aren’t doing a December event this year) at Analog Brewing Company.

What prompted you to create the group?

I started YEGFEMDEV because I wanted to give a platform and place of belonging to people who may not have it. The games industry has to change. We are holding the world back by making excuses or saying that women and others do not deserve space in this industry, and every time we deny the right of a gender diverse person to exist as their true identity we harm everyone’s human rights.

I guess the best way I can put it is –  I do see eliminating personal biases and seeing people for who they truly are + coexisting peacefully and accepting them fully to be a life-long project for anyone. Nobody does it perfectly every time but I hope that as a community we can continue to grow and let YEGFEMDEV be a place of belonging and learning for developers.

What are your thoughts on the game development community in Alberta?

I am humbled every day by the amazingly talented people that I get to work with and blown away by the support and resources that I have coming from all levels of BioWare. On top of that, when I started YEGFEMDEV I was amazed by how many gifted and talented developers there actually are in the city. A lot of them are doing really cool stuff… And on top of that, some of the best friends that I have ever had has come from YEGFEMDEV. It’s a really nice side effect of all of my hard work. You’ve all made everything worth it.

I believe that when the conservative government cut funding for developers here, they stomped on something beautiful. There were a lot of really lovely A/AA studios cropping up with passionate developers who wanted to be here. From what I saw during my meetups, a ton of jobs were generated even in the short time that the tax credits existed. So I’m pretty disappointed by our government here, in all honesty.

Finally, a fun little question I like to ask.  If you could work on any game series what would it be and why?

Omg. So – my original end goal was to make RPGs. So – I really want to continue my work with the Dragon Age team but would also like to work on a mainline Pokemon game. I’ve been a die-hard fan since gen 1 so I’m really passionate about it. If given the chance I would also 100% revive the Ultima series. I think the IP has a lot of untapped potential. I also really want to work on some Sims content sometime. I have a lot of really neat ideas for that. I guess I could just mod that. I also really want to make a lot of auteur/artistic games. I never had the chance when I was in indie because I was too busy making money. I never really had financial privilege to just make 100% whatever I wanted. I think people can really misunderstand just how rare that is, even for indies.

Thanks Melissa for taking the time to be our December 2019 Community Spotlight member.

Melissa is a game designer and community organizer in Edmonton, AB.