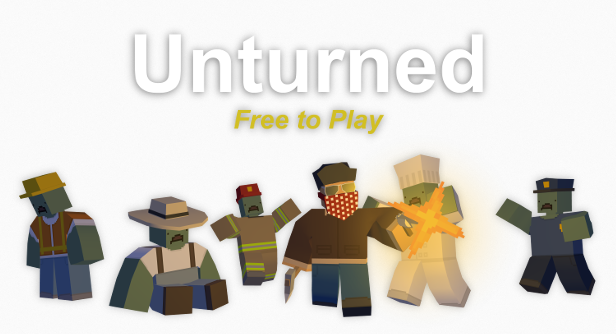 STAY UNTURNED
You’re one of the few not yet turned zombie. Keeping it that way will be a challenge.

STRUGGLE AGAINST NATURE
Zombies aside nature does plenty to make life hard.

DEAL WITH OTHER PLAYERS
Friend or foe there’s a lot of interesting people online.

HELP THE NEW SOCIETY
Plenty to do even if you’re offline or going solo.

FORTIFY YOUR STRONGHOLD
Somewhere to kick back and chillax or a hideout to direct your gang, whatever floats your boat (in this case sometimes literally).

TRAVEL BY LAND, AIR, AND SEA
Roll out in style with a fully stocked garage.

MOD EVERYTHING
From the ground up Unturned was designed for modding.

NEAT STUFF
I think these features are neat and they didn’t fit anywhere else. There’s many more I want to include but for brevity’s sake: